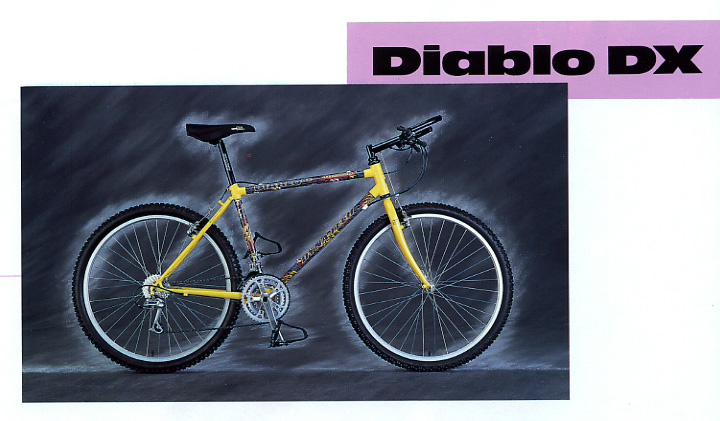 While browsing the web and thinking of possible future vintage MTB projects, I inevitably get side-tracked by all the photos of splendiferously beautiful mountain bikes of yesteryear.

I usually just book mark the photos for future inspiration, but here I’m going to show five of my favourites, if not necessarily cost-effective, vintage mountain bikes.

A sublime bespoke build from one of the great frame builders of the British Isles. The colour-matched Girvin Flex Stem (and other parts) is a nice touch.

Super expensive, and with a frame prone to cracking near the bottom bracket. But wow! 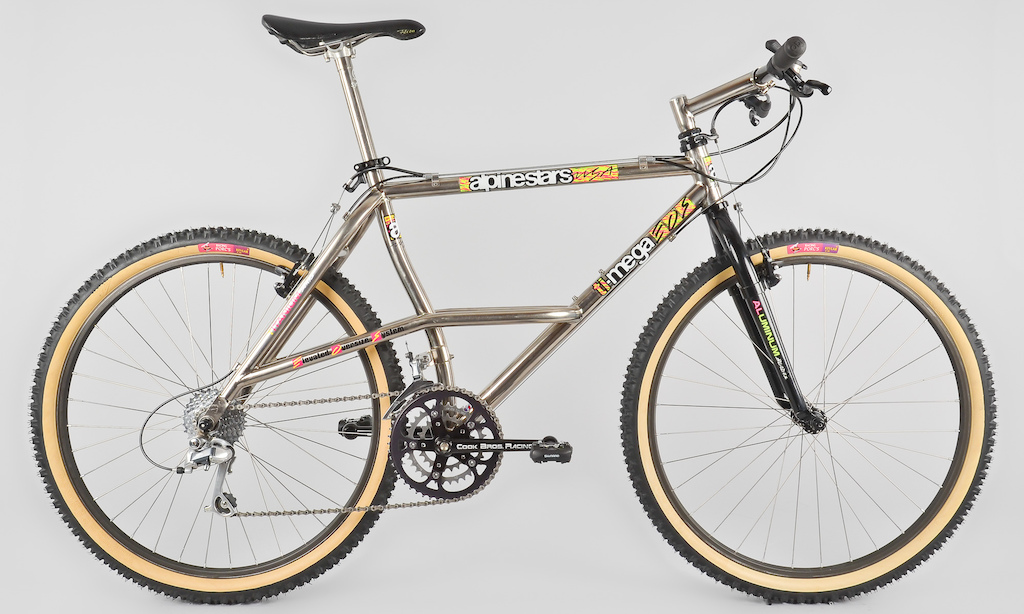 Fat Chance Yo Eddy with aqua-fade

Known to ride like a dream (for a rigid steel bike), this bike’s look simply blows my mind.

What’s not to love about this bike? Loads of purple anodyzing, and Spinergy wheels. Really awesome.

The frame design in itself looks great, but the paintwork and the touch of tasteful purple anodyzed parts really are the cherry on top of the cake. This frame is currently up for sale, as it happens, on retrobike, for a couple of thousand Euros.

My choices are, of course, totally subjective.

From my collection of vintage MTB frames, this is my Muddy Fox Courier Comp. It hails from the golden age of Muddy Fox mountain bikes, before the brand started using its name to peddle mountain bikes that were complete and utter rubbish. 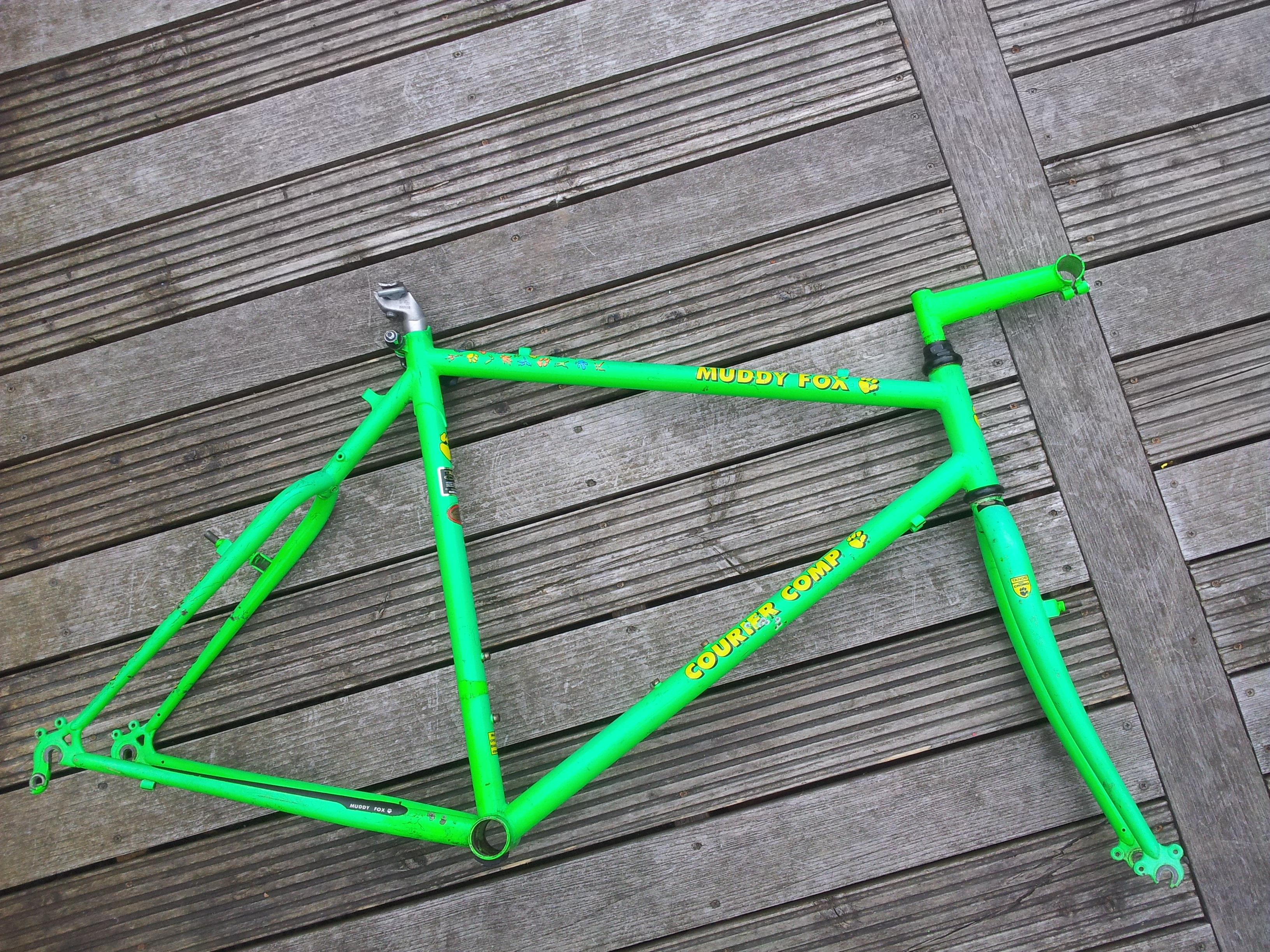 This was something of an impulse purchase, Fortunately, it cost peanuts. My interested was piqued by its Tange Infinity steel tubset, with a beautiful wishbone structure on the seat stays, and its bright green paintwork with matching steel stem.

The paw-print stamped into the seat tube sleeve is also a nice touch.

I have no plans to build it up, as yet. But if anybody has any ideas, please feel free to add a comment below. 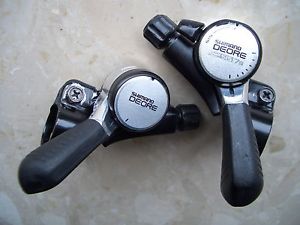 But I still prefer thumbshifters, namely Shimano’s 7 speed Deore and Deore XT early 90s. In fact, I still use thumbshifters on most of my mountain bikes.

See, for example, my Haro Extreme, my Raleigh M Trax 300, or my Rourke. I’m also planning to use a set on my soon to be built Dynatech Voyager and Dynatech Mission.

* allows the user to trim the front mech to avoid chain-rub on the mech’s plates.

* they have a hidden extra click, allowing use with an 8 speed cassette. 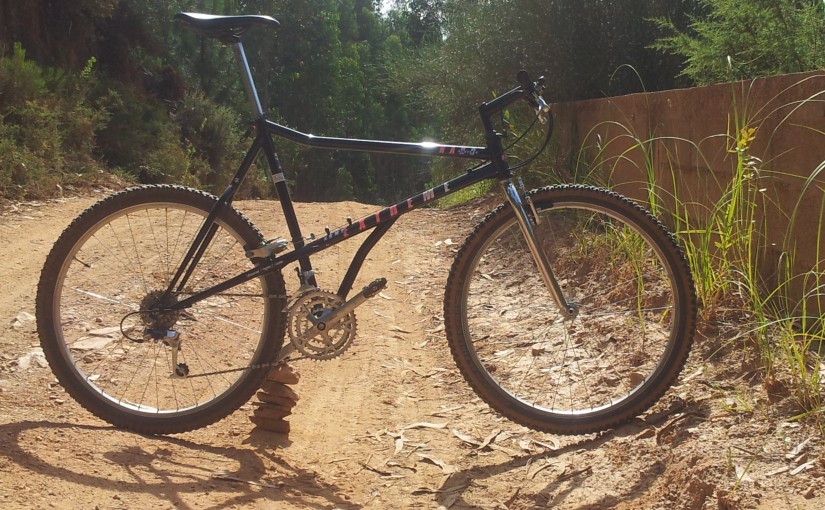 What first drew me to this frame was its unique design, with its elevated chain stays, curved top-tube, and the U-brake bosses on the rear. After having a detailed look at the original, complete bikes shown in the early 90s Haro catalogues, I had to have one, and I acquired my 21.5 inch, 1990 or 1991 Haro Extreme Comp frame as a Christmas present. 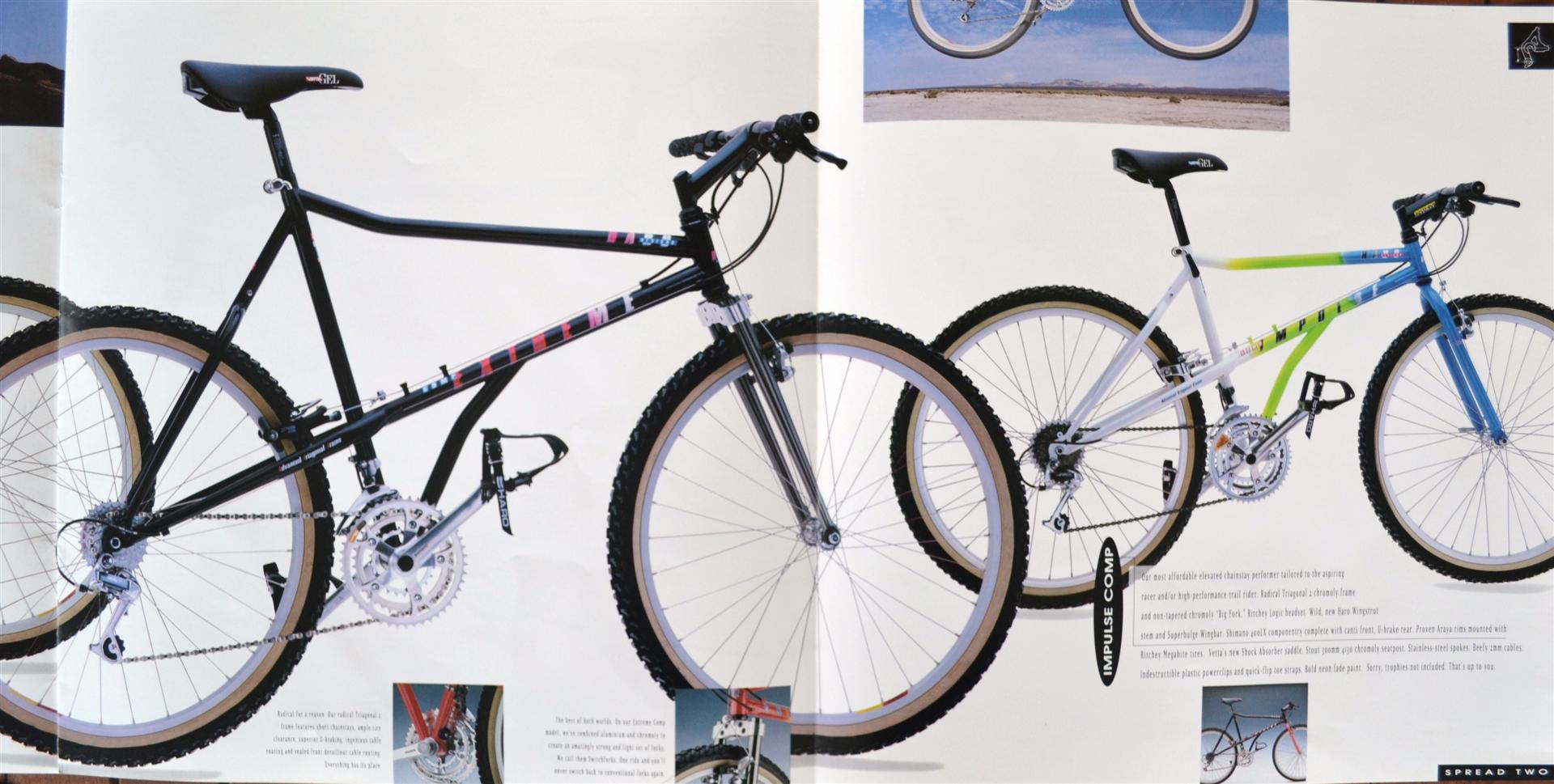 Then, over a period of a year and a half, I slowly but surely acquired the parts that would be necessary to build the complete bike. Although not identical to the original bike as shown in the catalogue, the mix of parts, importantly, is period-correct and give a very similar look.

This is the result of my first build: 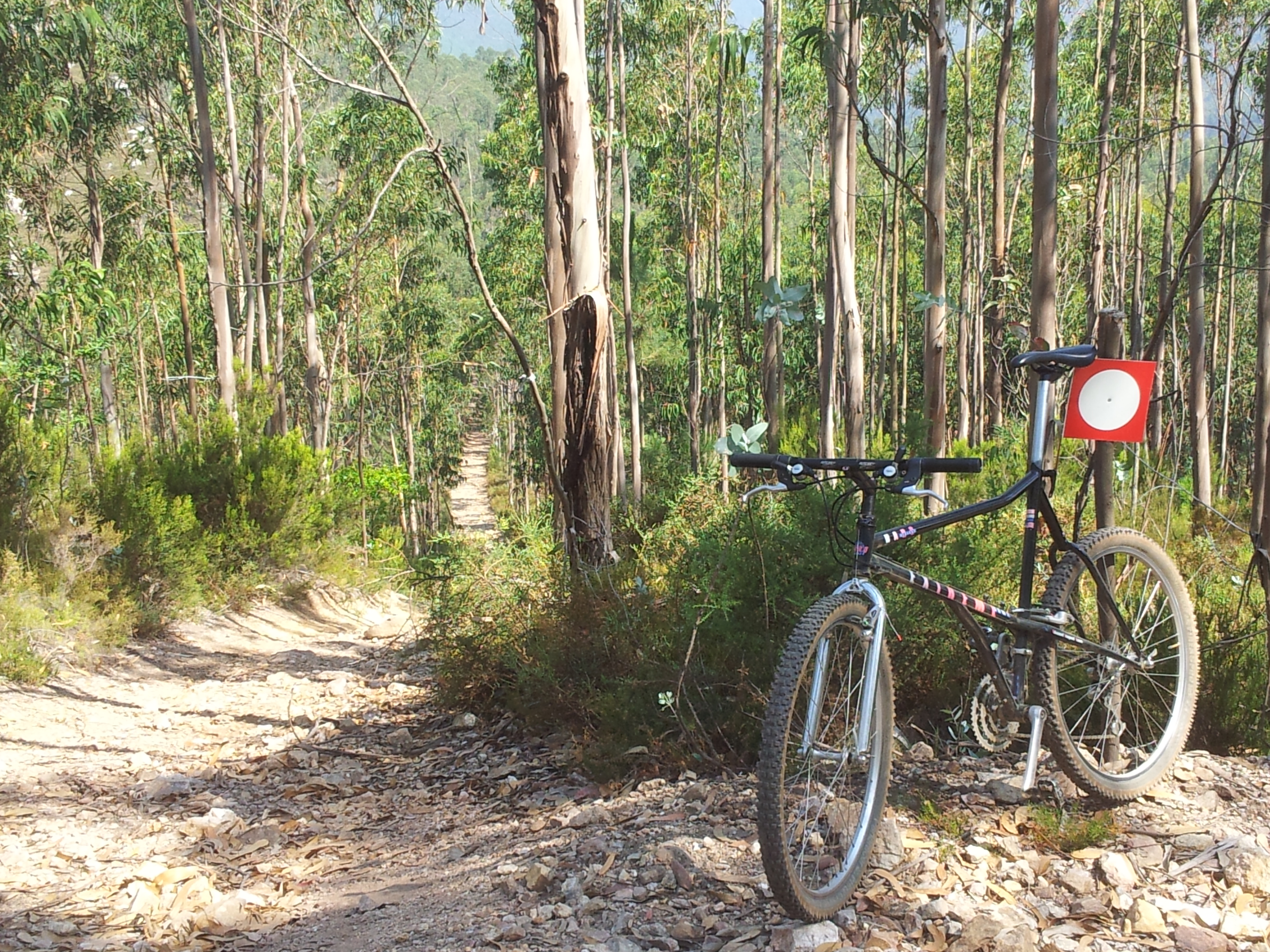 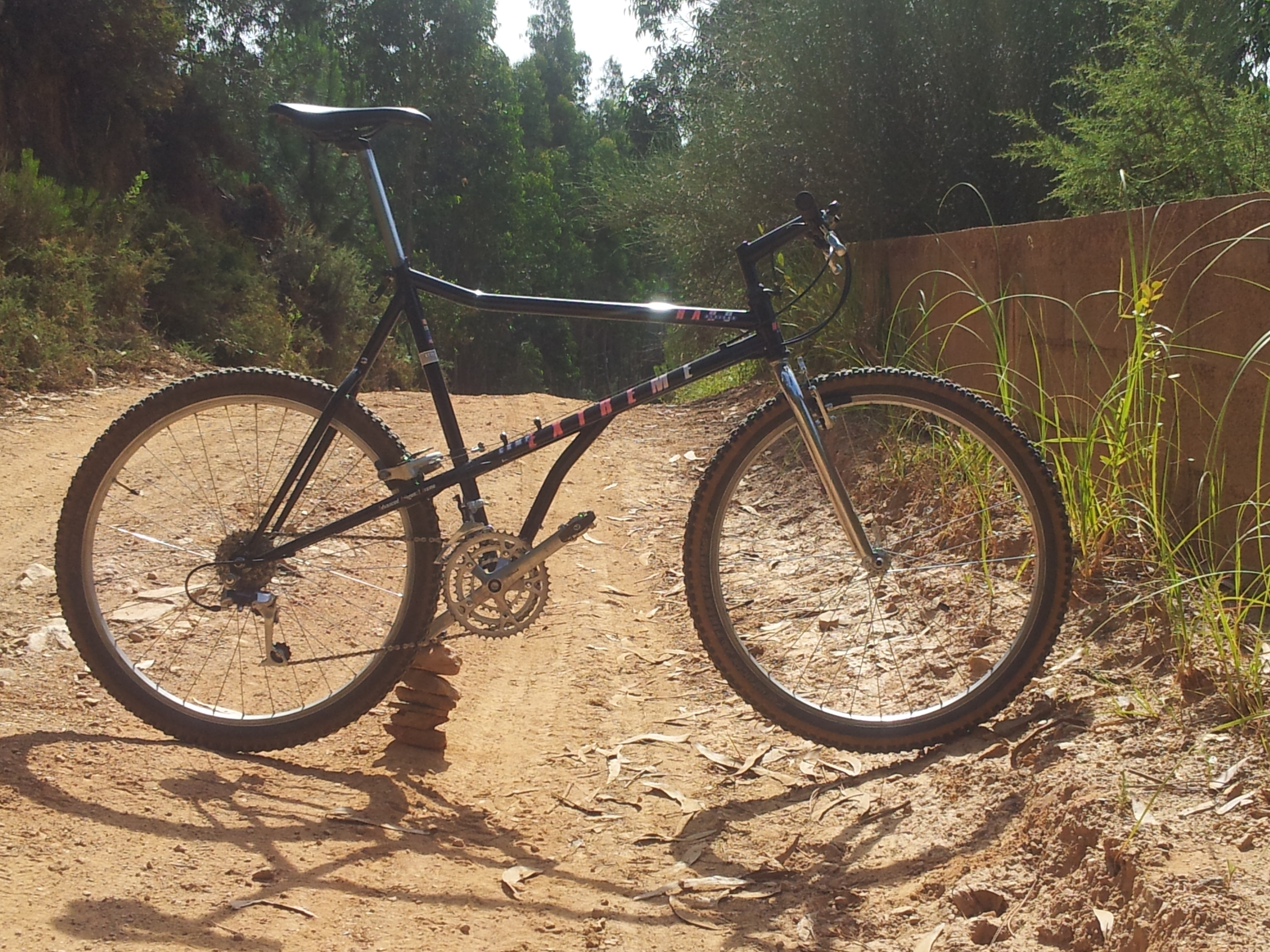 In particular, the chrome-plated chrome-molybdenum Big Fork from Tange has a striking form, and contrasts with the black paintwork of the frame. The vintage Dan Falvey stem and Deore DX seat post help keep things real with steel, for added strength and some extra shock absorption. 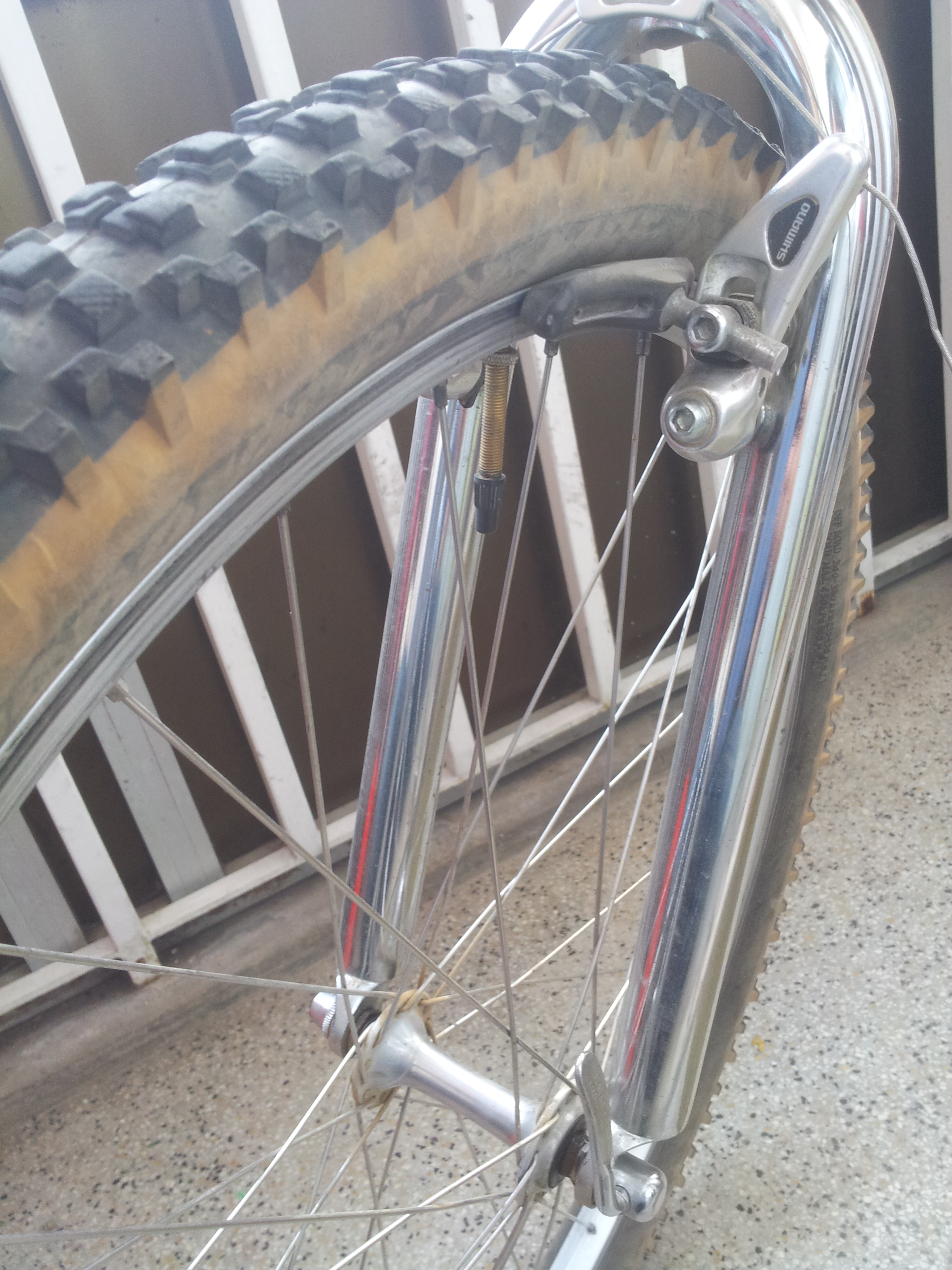 The Shimano Deore 7 speed thumbshifters give slick, accurate shifting, with the added bonus of allowing the front derailleur to be trimmed when necessary.

The bike rides really well, particularly when sprinting or riding uphill. Unlike my hardtail rides, even on the steepest climbs there’s no sign of the front wheel lifting or wandering.

Moreover, and this might be imagined, it feels as though I’m faster, or more powerful, on climbs. I might test this using Strava, but it wouldn’t be surprising if the shorter chain stays and head-down were to be delivering greater traction and/or greater power.

Unfortunately, in its current form I have a few problems with the bike.

Firstly, the short head tube means it’s not easy to set the bars at a comfortable height – even using a quill stem with a bit of rise such as the one currently fitted. And the narrow bars make the steering a little twitchy at times. Solutions I have in mind include fitting a wider bar, and looking for a quill stem with even greater rise. Fitting a suspension fork would also help to elevate the front end a little, although I’m growing rather fond of the chromed Tange Big Fork – at least in the looks department.

The brakes don’t quite have the stopping power I’d like. This is partly due to my poor set-up of the front cantilevers (which can be sorted with a bit of work), but the lack of set-up options for the rear U-brake means the only way to change the modulation is to experiment with different brake levers (incidentally, this is one of the reasons U-brakes fell out of favour in the 90s). A set of shimano servo wave levers (with shifter pods removed) would be my first choice here, but Magura hydraulic brakes could also be a useful alternative solution. 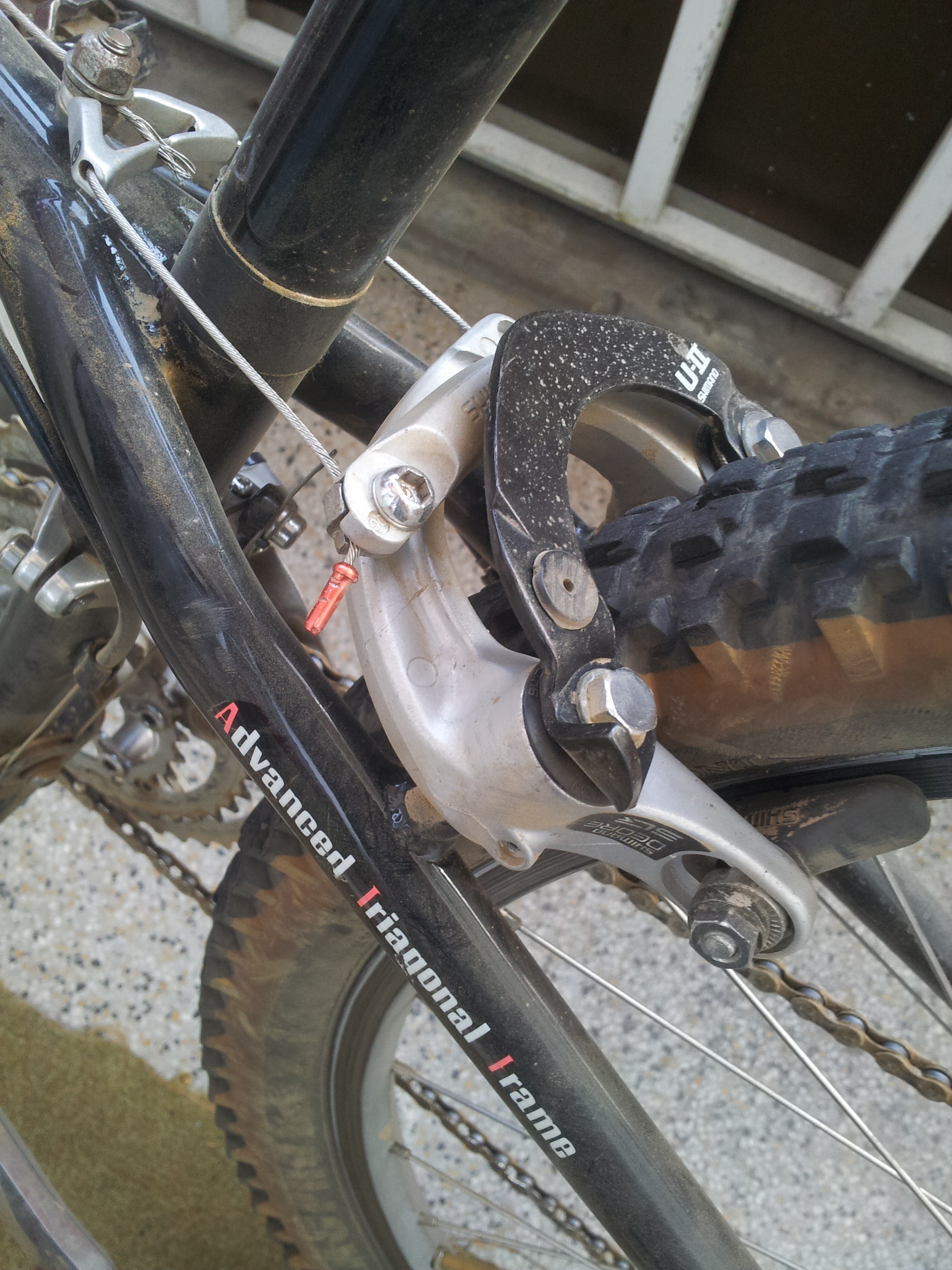 Undoubtedly, there are many options to make my Haro Extreme Comp more enjoyable to ride. The real question is whether it makes sense to spend much time or money doing so. 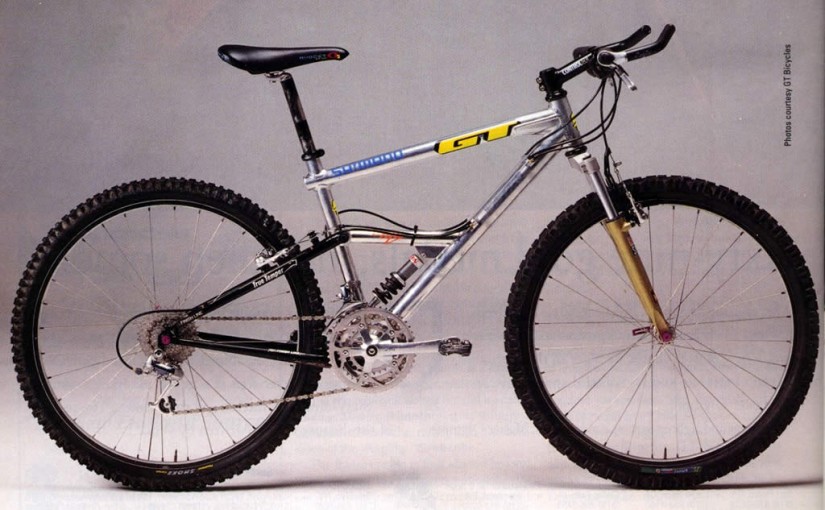 And as such, there are a number of suspension forks and suspension frames that remain surprisingly capable by today’s standards. Although highly subjective, and by no means exhaustive, this is my list of what I consider to be the 10 best full suspension frames from the 1990s.

Photo from this retrobike thread. 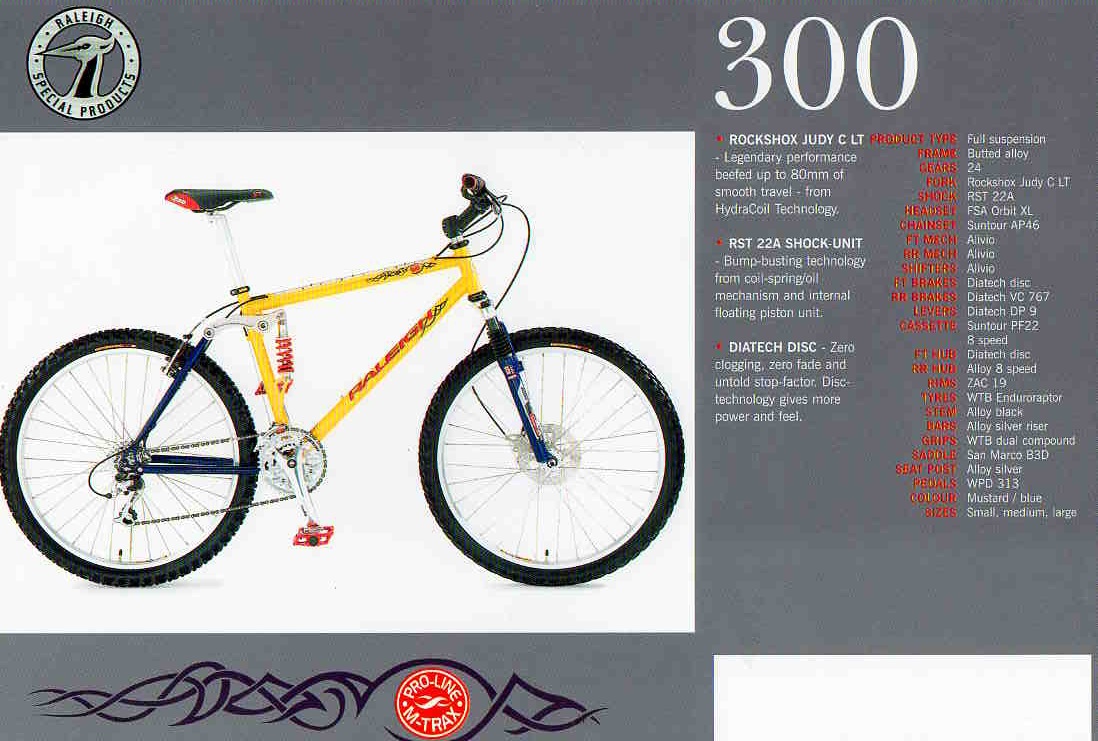 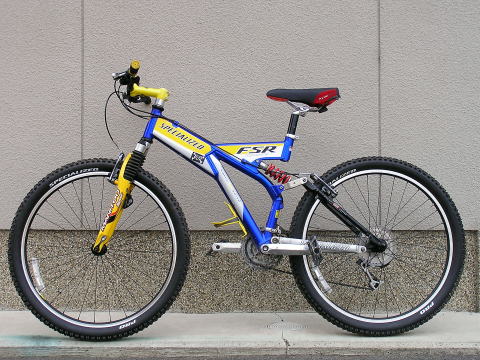 Photo from this webpage. 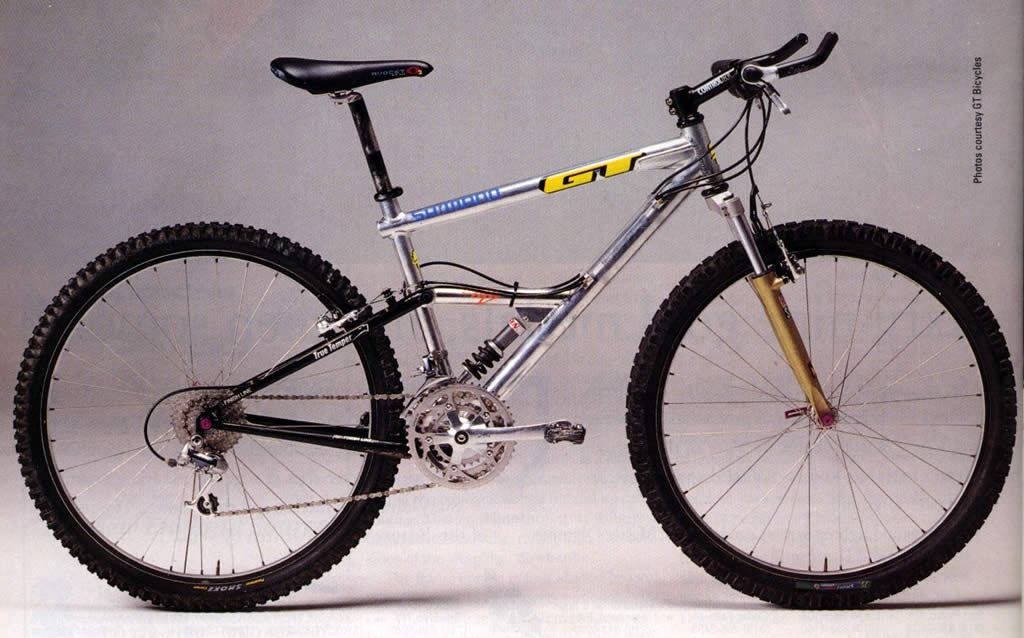 Image from this MTBR thread. 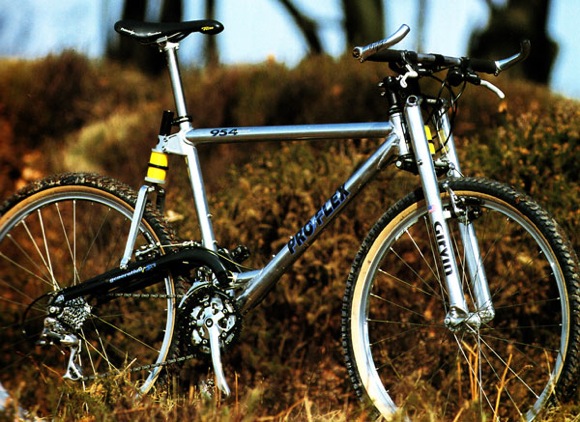 Photo from this site, but originally scanned from the “Pro Mountain Biker” book (Jeremy Evans and Brant Richards, 1995).

Photo from this mtbr thread.

This iconic frame design (said to have been invented by Richard Cunningham) started to appear around 1988, and lasted well into the mid 90s, the elevated chain stay (or e-stay) gained a cult following, but never came close  to replacing the classic double-triangle frame design.

E-stay frames allowed for greater clearance for the rear wheel, a shorter wheel-base for better climbing and manoeuvrability, elimination of chain-slap, and the ability to remove a chain without breaking it.

For many, these advantages outweighed the downsides, which included additional weight, and some extra lateral flexibility and weakness in the bottom bracket area.

The rise in popularity of 29″ and 650b wheeled mountain bikes has rekindled interest in elevated chain stays, as a way to have a shorter wheel-base when using big wheels: There are already e-stay 29er prototypes going around (photo below).

It would be rather ironic if a modern innovation like large wheels were to now lead mountain bikers back to an extinct design like the e-stay.