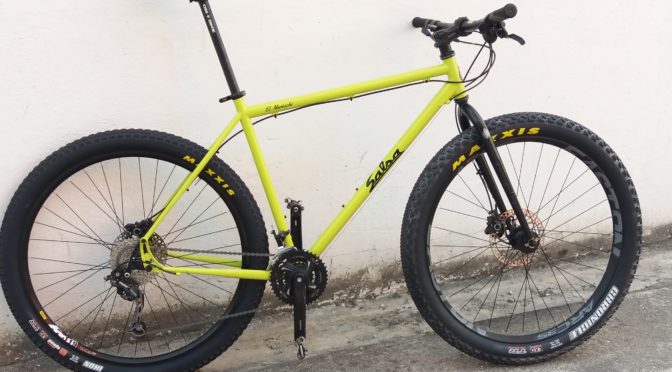 Are bigger wheels and tyres better? In this post I’ll share some thoughts and experiences of testing different wheel sizes and different tyre sizes.

I’m at least a decade late to the wheel size wars, but I wanted to test for myself whether the recent bandwagons of larger wheels and fatter tyres are the real deal or just industry hype designed to sell more bikes.

The test course consisted of a ~10 km off-road loop with ~200 m of ascent, broken into 4 individual climbs, some flatter sections and some downhills. Being Portugal, the conditions were bone dry with a mixture of weathered bedrock, a kind of gravel made of fist-sized stones, and dusty hard-pack. Basically, these are fire roads but built without bothering to condition the surface for vehicles.

The climbs are somewhat technical in places to due rocks, and their average gradients range from 6% to 13%, and the downhill sections are similar in character.

In general terms, these results aren’t too much of a surprise, as it’s been claimed (perhaps even known) for years that larger wheels are generally faster for XC type riding, even if the industry has been strangely unable (or unwilling) to prove it with transparent testing.

There were two big surprises in this data. The first surprise is that just by opting for widers tyres, I was able to get an extra 10% of climbing speed from my 26er. In the more realistic case of a 26er with 2.1 tyres, switching them to 2.35 ones should still mean a climbing speed increase of ~5%.

The second surprise is that the heaviest bike of all was the fastest climber. Naively, I expected that it’s steel frame and forks, together with its heavy 29+ front wheel, would result in a bike that’s a bit slow for a 29er, but still loads of fun. The best explanation I have is that the 30.5 diameter front wheel rolled over obstacles and bumps even better than  a “normal” 29 inch wheel – the same “science” behind 29ers being faster than 26ers, but with a bigger wheel.

Another interesting point is as far as I am aware, this is the first test to compare a 29+ front with a 29er rear against a normal 29er. Some magazines have tested proper plus bikes against “skinny XC” equivalents, usually concluding that the plus bike is fun but slower. This might be because the rear wheel suffers more rolling resistance because it’s this wheel that the riders applied torque to when they pedal, resulting in greater losses due to tyre deformation. By combining a fast rolling real wheel with a 29+ front wheel, maybe I got low rolling resistance where it counts more, and a large diameter wheel for rolling through obstacles where that counts more.

And it certainly does feel like the 29+ wheel can roll over anything in its path. In fact, during a recent marathon race I found I was able to pass riders on the climbs by taking the slightly rougher, outside line to overtake, thanks to the amazing rolling capabilities of that wheel.

On a more general note, the results show that bike weight is not such a big deal as long as you have the right technology on your bike. In the tests described here, it is clear that any time penalty from running a 29+ front wheel is outweighed by the speed increase provided by this wheel. Likewise, the extra weight of setup #3 (normal 29er) over #1 (26×1.8) is outweighed by the benefits of the 29er wheels.

I started each session well hydrated and with a good breakfast (identical on each day) 2 h behind me, and an energy bar eaten a few minutes before starting. During the climbs I maintained a 95% level of effort, determined using a heart rate monitor. I rested for 5 minutes between each climb.

When doing this kind of test it’s important to be honest and state that it’s next to impossible to run a side by side test of two different bikes or components in a completely controlled manner. Variables like the weather conditions, trail conditions, nutrition, hydration level, tiredness etc. are likely to differ between runs, and as a rule of thumb I’d say the uncertainty in speed differences are likely to be around 2% or more. It must be frustrating being a pro racer trying to figure out which tyres or bike set up makes them faster, because  even a few tenths of a per cent is enough to make the difference between winning or coming second, yet detecting a 1% difference over a test course is technically very challenging.

Nevertheless, in this case it is clear that my results are statistically meaningful, not only because the difference in times are quite large, but also because these differences were consistent across all four climbs. What’s more, my times consistently decreased each time I tried larger wheels and/or wider tyres.