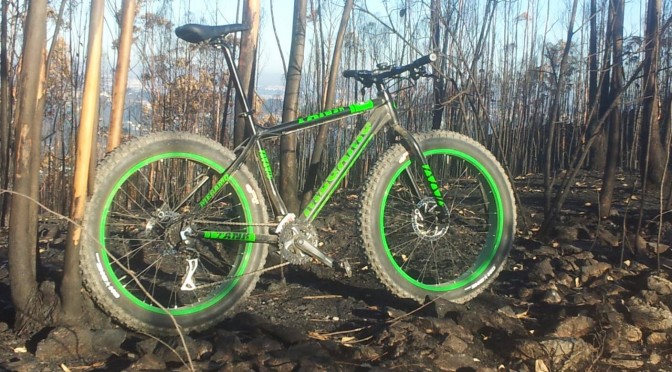 Behold the Megamo Fat Tank. I’ve been riding this one for 6 months now, I thought I’d write up some thoughts after testing the bike under various conditions and different off road routes. My usual ride covers about 80 km, mostly off-road, with an elevation gain upward of 2000 m.

Although I own the 2016 model, this review should also apply to the 2017 version as it appears to have identical specifications.

The drivetrain components are as basic as one would expect at this price-point (RRP €500), with a mix of no-frills Shimano Altus and Acera components which get the job done reliably. The Shimano M315 hydraulic disc brakes work surprisingly well.

I like very much the look of the bike, which strikes a good balance between the brash paint jobs of yesteryear and the understatement of modern bikes. The bike itself attracts a lot of attention and is always a talking point.

To make sure I get the most out of it, I immediately looked for cost-effective upgrades to make to my new bike.

Although the 3×8 transmission works well, the gearing isn’t quite low enough to deal with the kind of steep, low traction climbs that the fat tyres would otherwise let you ride up. Swapping out the Tourney HG400 12-32 cassette for my spare HG41 11-34 one helped a lot, but after a few months I still feel I need even lower gearing, so I’ll be fitting a 9 speed Deore 12:36 cassette and the corresponding rear shifter and chain. I’d say a 2×11 with an 11-45 cassette would be ideal, but upgrading to 11 speed is too costly to justify on this bike for the time being. 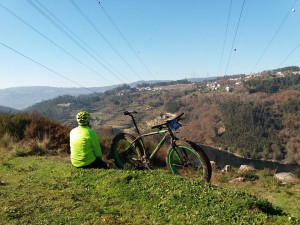 The stock tyres were extremely heavy, weighing in at more than 2 kg a piece, so I changed them for a pair of 120 TPI folding Floaters from On One, saving about a kilo per wheel in weight, and making a very noticeable improvement in rolling resistance.

I also fitted a pair of lighter inner tubes, saving an additional few hundred grams per wheel. Thus, merely by changing the tyres and tubes I was able to remove a good 3 kg of rotating mass, and just as importantly, get a reduction in rolling resistance.

In collaboration with my local bike shop, I tried to do a tubeless set up to get a further reduction in rolling resistance, but the current rim and tyre combination doesn’t appear to allow a tubeless configuration. Which is a shame, because I think this bike would turn out to be almost as fast as my XC hardtail if it could be set up tubeless.

One minor issue is that even on the size L bike, the stock seat post is too short at 350 mm to accommodate very tall riders like myself, and the unusual seat post diameter (30.4) limits your choice of replacement post. I went with a 400 mm Kalloy SP248 alloy seat post, in black and without decals.

There are many other upgrades that could be done to shave off a few hundred grams here or there, but at a rather poor cost to benefit ratio compared to the performance gains that could be made by improving the wheels and tyres.

How fast is my Megamo Tank? Based on my Strava times, on a typical off-road climb I am about 15 per cent slower on the Tank than on my lightweight steel hard tail. Although it is a little heavy, the extra weight of the Tank is nowhere near enough to explain why it climbs so slowly. The extra rolling resistance from the fat tyres is to blame, and going tubeless should reduce the climbing handicap to something like 7 per cent.

However, on steep, loose or technical climbs my times are quite a lot faster, just as they are much faster on all off-road downhill sections. How much faster is hard to quantify, because it depends on the terrain. Sometimes the slower climbing is negated by being much quicker on the subsequent descent, sometimes not. On some climbs I am actually faster on the fat bike than on my hardtail! 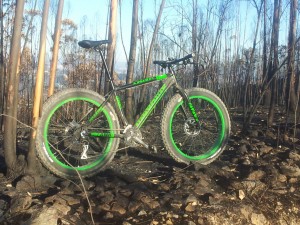 A better way to assess the speed gain / loss from using a particular bike or set-up is to look at the overall time taken to ride a climb and the following descent, or several ups and downs rolled added together.

I’m still collecting data on this, but on one of my most traveled Strava segments, a 6 km route with a 250m climb, my best time on the fat bike is only 2 per cent slower than my all time personal best. On another climb+descent segment, my current personal best was obtained riding the Tank, and was 4 percent quicker than my best times set on any of my other MTBs.

The verdict: A entry level yet capable fat bike that would benefit from a few inexpensive upgrades.

Full catalogue specs of the 2017 Megamo Tank can be found here. 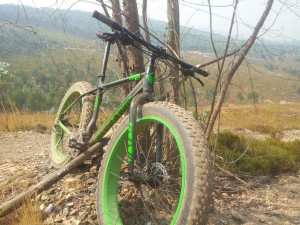