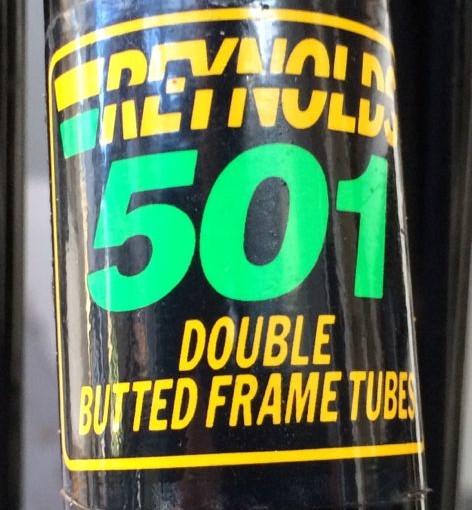 If you owned an entry level Raleigh mountain bike during the mid 80s to mid 90s, then chances are the frame was made from Reynolds 501 tubing.  It was the workhorse tubeset at the bottom of Reynolds’ steel range, and was cheap, strong, and not especially heavy.

As the proud new owner of a vintage Reynolds 501 mountain bike frame similar to the Raleigh Montage pictured below (from retrobike), I’ve been browsing through old catalogues and reading up on the tubeset used in my frame, to get to know what exactly I’m going to be riding.

The story of 501 pretty much begins with new mountain bike craze in the 1980s which saw a deluge of cheap, mass-produced chromoly frames from the USA and Japan, using tubing of quality that typically lay somewhere between the basic ‘gas-pipe’ tubing and the Reynolds 531. Partly in response to this, Reynolds developed their 501 tubeset, allowing the company to compete in this sector of the bicycle market.

A key difference with 501, compared with 531, was its manufacturing process.  Whereas 531 tubing is drawn out to form tubing,  501 tubing was seamed, meaning it was drawn as a sheet before being pulled into a tube, and then welded. The welding part of this process results in some (potential) weakening of the product. Anecdotal evidence, from various cycling forums I’ve perused over the years, suggests that 501 is indeed weaker than 531, with failures occurring along the seam in the tube.

At the time, Reynolds claimed that their 531 and 501 tubes were of equal tensile strength when manufactured, but with 501 being having a tensile strength of about ten percent less than 531 after being welded.

The related tubeset ‘Reynolds K2’ then appeared during the early 90s to replace 501 in some mid range steel Raleigh mountain bike frames. K2 tubing was used in lugged and brazed steel frames from the Raleigh and M Trax ranges from 1992 or 1993 to 1995. K2  is rumoured to be similar to 501, but with a twist.

This seat tube decal comes from a page in the 1993 Raleigh Off Road catalogue, and appears to be one of the only photos of a Reynolds K2 sticker to be found on the web, to the best of my knowledge. And since information about the K2 tubeset itself is so scant and difficult to find, this short blog post quite possibly represents the most authoritative description of K2 tubing in existence on the web!!

That same 1993 Raleigh catalogue says this about K2:

After I contacted Reynolds, I was fortunate enough to get this reply from Terry Bill, who spent 49 years working for Reynolds:

K2 was a special tube set made for Raleigh. I have no records, but from memory, it was a 501 CrMo material, and had 8 flats along its full length (not butted). It was one of the earlier “oversize” tube sets.  31.8 down tube, 28.6 top and seat tube. The flats (laterally aligned ribs referred to by Raleigh) would only be for about 2/3rds in the seat tube so the pillar could be entered.

The concept of tubes with 8 flats along the length was first used by Reynolds in their 700 Classic road tube set, but it was not popular with the small builders, they wanted to use the “butted” term when selling frames, and we withdrew it.

Raleigh then adapted it for their K2 mountain bike range. The K2 top and down tubes had 8 flats along the length and no butt. The seat tube was only flats for part of the length so the seat pillar could be fitted. Raleigh did this because they felt the flats gave extra stiffness to the frame, to stiffen the BB shell to stop the sideways movement when pedaling.

In 1996, K2 was replaced with the Reynolds Optima cromoly tubeset. Like its predecessor K2, this was a tubeset produced especially for Raleigh, for use in their bottom of the range Special Products Division models.

Terry Bill also told me this, about Optima tubing, which confirms some internet rumours:

Raleigh Optima tubes were again special manufacture for Raleigh. These were a butted 501 material, but the butts were very short.

Almost no additional, reliable information exists on the web about Reynolds Optima, aside from a handful posts on bicycling forums which are all a variation on ‘I found a bike and the frame says it is Reynolds Optima, is it good?‘. 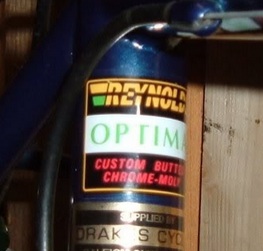 Decals such as this, found on some Raleigh Special Products Division frames from the late 90s, prove that Reynolds Optima really did exist. As we now know, optima was essentially a new version of 501, presumably having been tweaked to cope better with tig welding, which in turn allowed for lighter frames compared older lugged 501 or K2 frames.