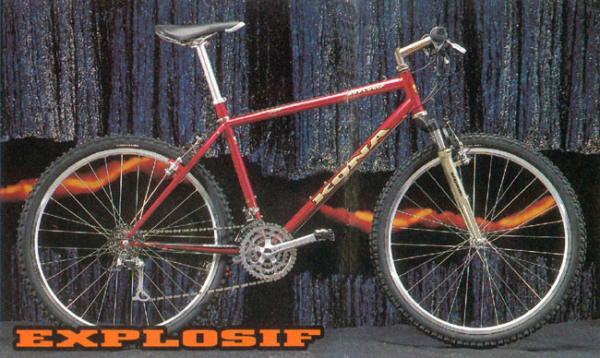 Modern mountain bike technology is incredible. The arrival of decent suspension, hydraulic disc brakes, tubeless tires, and many other innovations all help today’s hard-core mountain bikers go faster than ever before, for longer, over more challenging terrain.

The contrast with the technology we used in the 90s couldn’t be any stronger. It’s actually quite hard to believe we rode off-road with rigid forks, cantilever brakes, and so few gears, and lived to tell the tale.

Few would seriously argue that modern mountain bikes are not better overall than their 90s ‘retro’ ancestor, but here are some ways that 90s mountain bikes were better…

One of the great things about mountain bikes during the 90s was their simplicity. No shocks to tune up, no hydraulics to bleed. Keeping your bike in good working order was pretty easy, and rather cheap by today’s standards.

Thinking about going out for a ride? Just grab the bike, check the tire pressure, squeeze the brakes, double check the most crucial bolts are tight enough, and off you go.

When everybody used 26 inch wheels, borrowing a suitably sized replacement inner tube from a riding buddy was a heck of a lot easier than today, what with 26 inch, 650b and 29 inch. A single size of wheel also made thing simpler when upgrading to the latest frame – just fit your existing wheels to the new frame, without worrying about whether to make the jump to a trendier wheel size.

As a material for frames and cycling components, steel is hugely under-rated. Steel is cheap, strong, fatigue resistant, and easy to repair. Rear mech hangers can be bent back into alignment numerous times before they are ruined; damaged or rusted tubes can be removed and replaced; disc tabs can be added easily to usher a retro steel frame into the 21st century.

It’s true that steel frames and components are not the lightest, yet they aren’t overly heavy and some would argue the strength of steel is worth the slight weight penalty compared to aluminium or carbon. In any case, weight doesn’t matter much these days, judging by the 28-30 lb weights of most mid-range modern mountain bikes.

There is also an argument to be made that steel bikes are the ethical choice. A good, hand-made steel frame will last a lifetime if cared for properly. Choosing this over far-eastern aluminium or carbon will significantly reduce the ‘carbon footprint’ of your bike, and as such will help the environment – you know, the wilderness and countryside we ride in.

4. Shifters that allow you to trim your front derailleur

I’ve never understood the need for having indexed front gears. Not only are shifts between chain-rings much less frequent than shifts on the rear cassette. But indexing also forces you to use a single front derailleur position, which can take a lot of tuning to get just right. When not perfectly tuned, the chain can grind noisily on your front derailleur’s chain-guide when using gears at the extreme ends of your cassette.

This is (or was in the 90’s) easily solved if your gear levers are thumb-shifters or grip-shift, because both allow micro-adjustment of your front derailleur. Goodbye grinding chain, hello perfect front derailleur alignment!

5.  Bikes were lighter despite all that steel

However, concerns about bike weight seems to be more about vanity than performance. Dwarfed by a rider’s body weight, the weight of your mountain bike is barely worth worrying about. Unless you find yourself regularly carrying the bike over obstacles, or your bike is super-heavy, just lose some body weight instead.